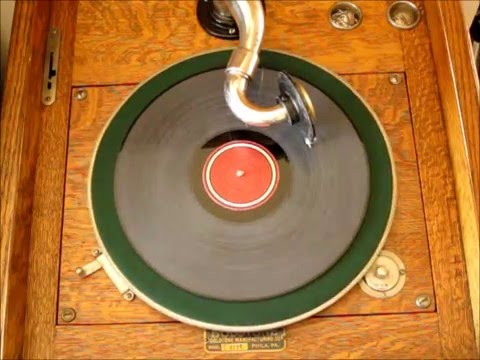 Lyrics in the [Closed Captions]

Listen to this record played on a modern 78 rpm turntable here:

The 2010 video game, BioShock 2, takes place in the underwater city of Rapture in 1968. Though vinyl LPs and 45s were invented in 1948-49, Rapture had an outside trade embargo with the surface and many gramophones are still seen throughout the city in the game.

Unlike vinyl, shellac pressing plants no longer exist today. Since vinyl is too soft to withstand steel needles, I was able to laser-cut a record onto acrylic.

Since this song never existed before on a record, this is intended to replicate the experience of listening to the song on the game’s phonographs of the late 50s. The label is a replica of the in-game texture for Rapture Records. Unfortunately, the title is a little long to fit on one line.

“Nobody Knows You When You’re Down and Out” is a jazz standard written in 1923. The 1929 Bessie Smith recording also appears in the game.

Here, it is interpreted by the character, Grace Holloway, in the dilapidated town beneath the railway tracks of Pauper’s Drop. A small snippet can be heard in Andrew Ryan’s audio diary, Pauper’s Drop. The song in full can be heard in the lobby of The Sinclair Deluxe if the player performs a gathering session with a Little Sister.

Unfortunately, the original audio was altered to make it sound like it was coming from a PA system. An echo effect was also applied.

Pitch variations are apparent since the record’s manufacture introduced more friction between the heavy tracking reproducer needle, requiring the spring to provide greater tension to spin the platter. More frequent cranking was required on the outer edges compared to the interior grooves.

Please listen to the 78 needle version for the correct speed.

Instructions on how to use a laser-cutter to make acrylic 78 rpm records here: